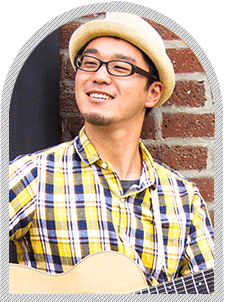 Born in Japan, raised in Dublin, Ohio (USA).  Shohei always knew he had a special connection with music through out his life…. having piano lessons from his mother, joining concert band in middle school, or always holding on to his Sony Walkman.  He finally found the sound he was looking for when he strummed a simple E minor chord on his father’s guitar. Ever since, he would try to play whatever song that caught his attention…. songs from the hit-charts, TV, movies, or from his parents CDs, but he was especially attracted to the authentic “guitar music” with some folk and roots influences.  He got his first steel stringed guitar, a Martin D-15, from his father on his 13th birthday.  He was astonished by the sound because it sounded just like his favorite recordings he would listen to everyday.  After practicing a song or two, he would perform those any time he had the chance…. whether it was just hanging out with friends, school talent show, or little house concerts.

He moved to Boston in 2004 to further pursue his musical education at Berklee College of Music. He studied with many prestigious musicians, such as John McGann, Walter Beasley, Bob Pilkington, Guy Van Duser, etc.  Afterwards, he officially started his career as a solo performer in 2009, playing at local open mics, major venues, festivals, company events, universities etc… and getting positive attention.  He also performed and worked with many prominent guitar players such as Adam Rafferty, Muriel Anderson, Richard Smith, Tommy Emmanuel and more.

In December 2010, he released his first solo instrumental album, “The Hills Have Ears” with 8 tracks of solo guitar music with 6 original compositions and 2 original arrangements.

Shohei currently resides in Kyoto, Japan, working as an performing guitarist all over the country.  He is currently plays his custom model Lichty Guitars, hand-made by Mr. Jay Lichty in Tryon, North Carolina

2011
– Won The Grand Champion of the “Home of the Legends” International Thumb-Picking Contest in Mulenburg, Kentucky